It's the last day of the month, and it's time to get all those challenge entries in! There is a fantastic sketch at Sassy Scrappers this month, so if you haven't done this one yet, make sure you give it a go!! Here's my layout (I used the Simple Stories Awesome range for this one, available HERE)... 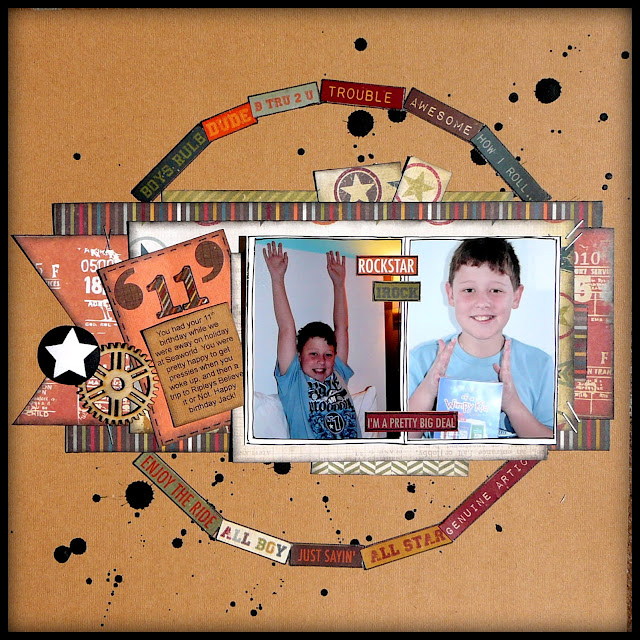 And here's the sketch... 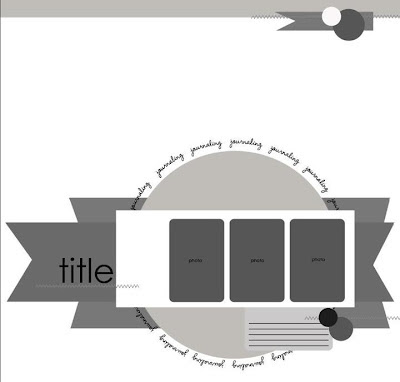 Make sure you link your entry up by tonight, and you'll be in the running for a fabulous prize!
Posted by Samantha Hauzer at 8:58 AM 9 comments:

It's So Quiet Around Here... 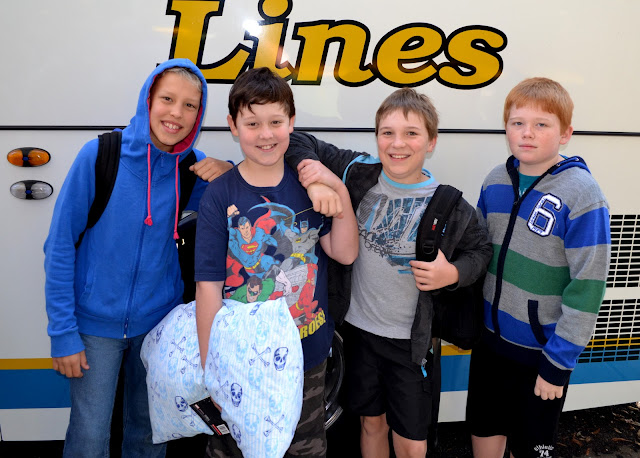 So Jack went off to his year 6 camp on Wednesday. We were packed and organised, and at the school by 7am, and he was so excited! He hardly gave me a backward glance as he climbed into the bus, so I had to sneak on to give him one last hug...but when I got up to his seat things had changed. He had tears in his eyes as he told me he'd left his special new torch that his Granny had got him on the table at home.

He got this new torch a few weeks ago, but he hadn't used it yet. It's one of those ones that go on your forehead, like a miners torch or something, and Jack thought it was SO cool. He was saving it to use at camp, and he wouldn't let me pack it in his suitcase, because it was 'just too special'.

So as we headed out the door, I grabbed his suitcase and sleeping bag, and he grabbed his pillow and his book. I didn't even think about the torch, and obviously neither did he. I tell you, my heart just about broke seeing him so sad. I know it's not a big deal, but when you're 11, stuff like that is a HUGE deal. If I had had enough time to go home and get it I would have, but the bus would have been long gone by then.

After I dragged myself off the bus, I told his teacher about him being upset, and I knew they'd make sure he was fine, but a few minutes later the teacher brought him out to me, and he was really in tears! And he didn't want to go to camp any more. Oh, it was hard to tell him to hop back on the bus, and he put his pillow up at the window, so I couldn't even wave goodbye to him as the bus drove off.

And I couldn't stop thinking about him all day. Hoping that he had cheered up, because I know what a sook he can be sometimes.  And then when I was scrolling through Facebook last night, I saw this on my newsfeed...


Made me so happy! This was on the school facebook page, just got to love that modern technology!!

So after I knew he was happy again, I could relax and enjoy the peace and quiet of only having one child at home :) And it has been so very peaceful, and very quiet. And I can't wait until my boy comes home tomorrow, even if it means my peace will be shattered :) :)

Hope you're having a great week!
Posted by Samantha Hauzer at 9:14 PM 6 comments:

Have you seen the gorgeous new Kaisercraft range released this month called 'Save the Date"? It is so bright and fun, and although it leans slightly towards the girly side, it can certainly be used for more boyish layouts too... 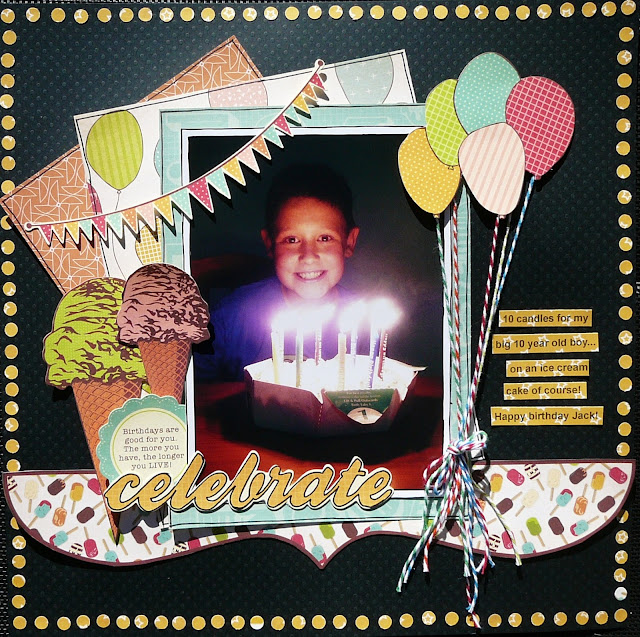 I love how the candles stand out in that photo! This layout was based on the Saturday Sketch over at the Kaisercraft blog. Make sure you give it a go if you can - there are some great prizes to be won! 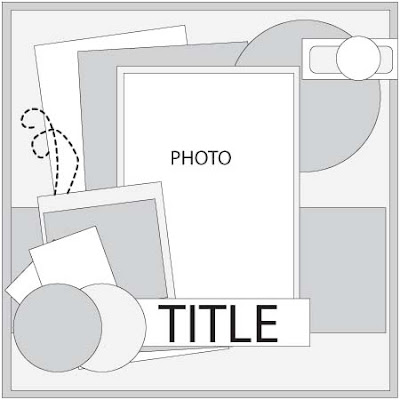 Next up is this little wall plaque. The photo I've used on it is a 3x4, so it's a really small and cute little plaque. So much fun to make! 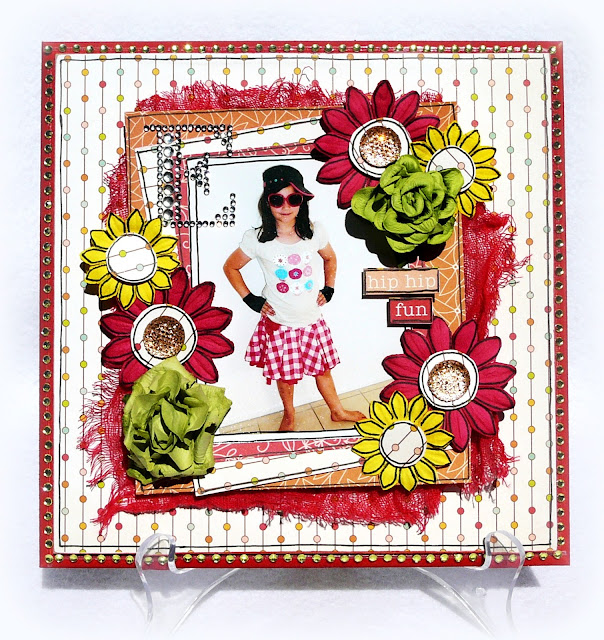 As soon as I saw the ice creams in this range, I knew I had to scrap these photos of Emily pretending to eat a giant ice cream! The little quotes on the die cuts that I used were just perfect, and so were the ice cream die cuts and epoxy stickers. And I couldn’t go past using one of the cute pinwheels on this page. They are so easy and quick to put together, and are the perfect fun embellishment to use! 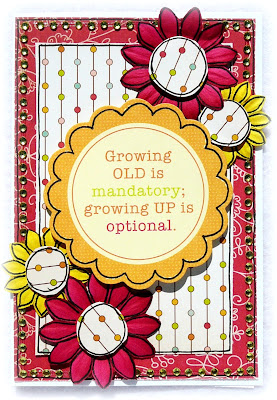 Hmmm...cards are definitely not my strong point, and I really struggle to make them, but this is another one for the card stash.

So...if you want to grab some of this cute range, make sure you check out Sassy Scrappers. You can see the whole range HERE.

Hope you're having a great weekend!
Posted by Samantha Hauzer at 10:31 AM 5 comments:

Good morning! It's such a beautiful day here today, you can really tell that summer isn't too far away. I am so looking forward to being able to take the kids to the beach after school every day again. We have missed it! Although I'm sure in a few months time, when the weather is all hot and stuffy, I'll be wishing it was winter again. It's always the way, isn't it?

I've been super busy with the kids, and with Purple Pumpkin, but have managed to squeeze some scrapping in too. Here are some of my projects that I created for Kaisercraft, using the fabulous Kaisercraft Attitude! range... 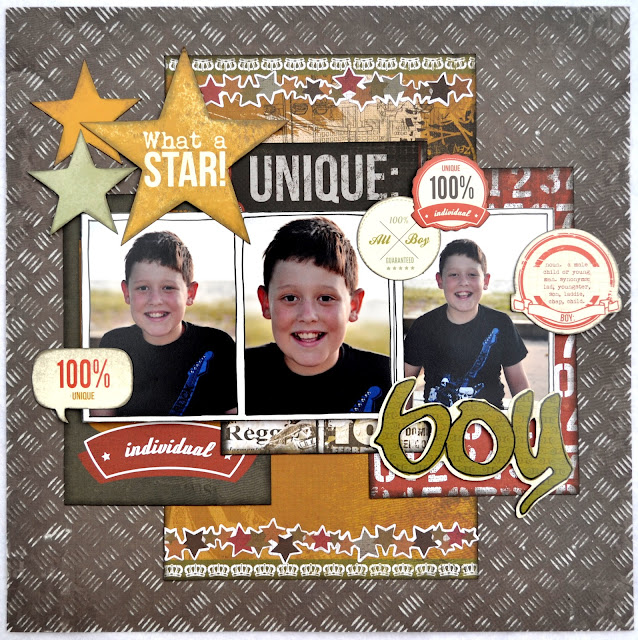 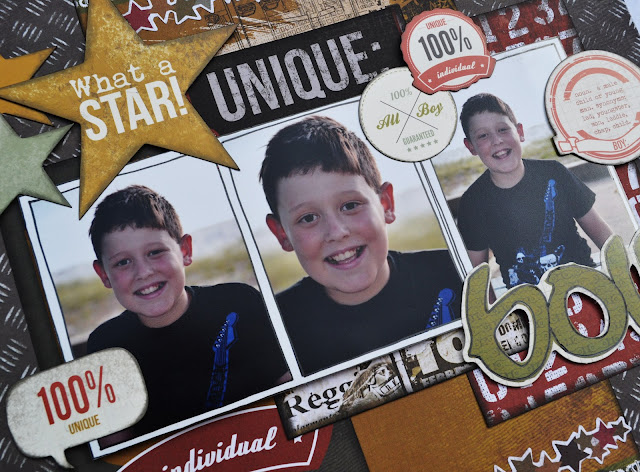 I have to say, this has to be one of my favourite boy ranges EVER! It is just so easy to scrap with, and the colours are perfect for boys of all ages. The specialty paper in this collection, “Industrial”, (which I used as my base paper here),  has the most fabulous texture. I sanded it all over to bring a bit more definition to it, and I just love the effect! 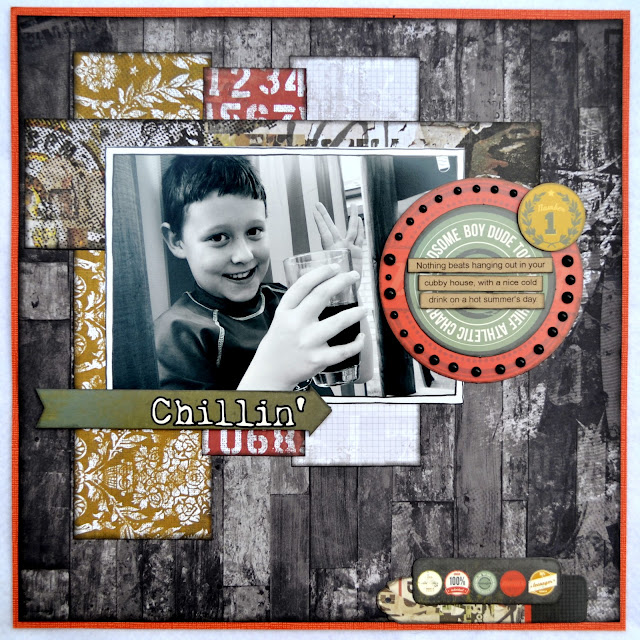 The die cuts (Collectables) that Kaisercraft bring out with their collections are just fantastic for putting together quick pages. And how gorgeous is that wood paper?

Now for an off the page project! 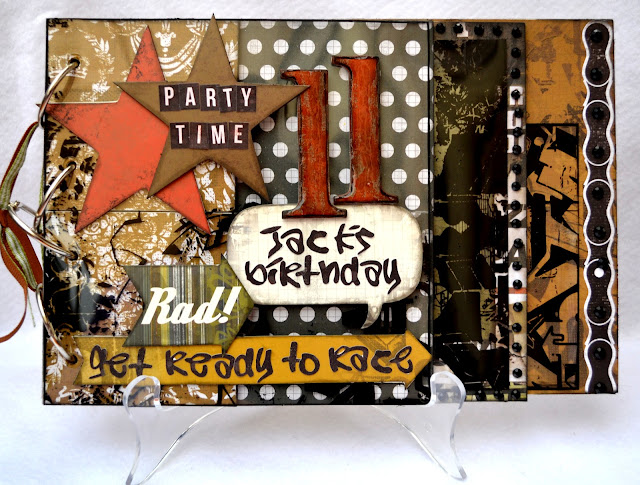 As soon as I saw the Attitude! range, I knew it would be perfect for scrapping Jack’s birthday party photos.  He’s getting to that age where I don’t really use the cutesy sort of papers on his layouts any more, and this range couldn’t have been more perfect for his age group. I think my favourite thing about this range is the alpha stickers. I just love that font! 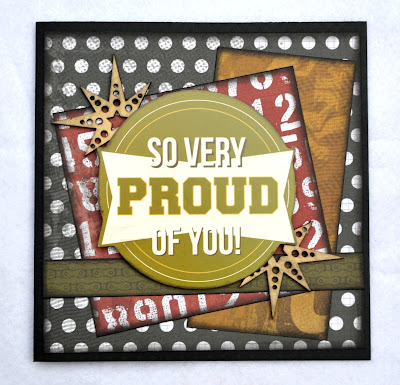 The Collectables in the Attitude! collection are perfect for using on cards. With great sentiments on them like “So Proud of You” and “What a Star”, it couldn’t be easier to whip up some cards for those boys in your life.

If you love the look of the fabulous Kaisercraft Attitude! range, make sure you pop into the Sassy Scrappers Shop HERE to check it all out.

Well, I'm giving myself the day off today! I've already finished packing todays PP orders, and now I'm going to sit down and do some scrapping.

Hope you have a wonderful week!
Posted by Samantha Hauzer at 10:31 AM 3 comments:

Good morning! I finally have a chance to update my blog. Yay! I have been busy with Purple Pumpkin, as well as scrapping lots of dt layouts for Kaisercraft and Sassy Scrapper. On top of that, I've been sick for 2 whole weeks with the 2nd worst flu I've ever had (swine flu was the worst!), but I'm pretty much back to normal now :)

So, here's a layout I did a little while back using the GORGEOUS Miss Match range from Kaisercraft... 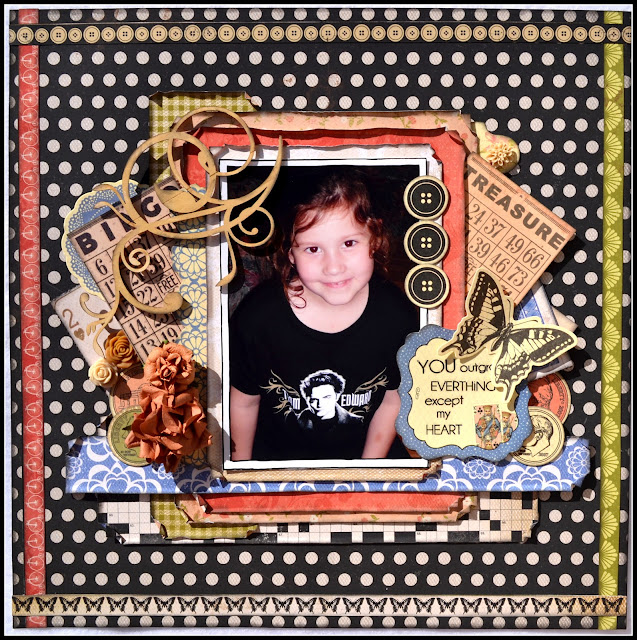 I love the vintagey look of those papers! Here's some close ups... 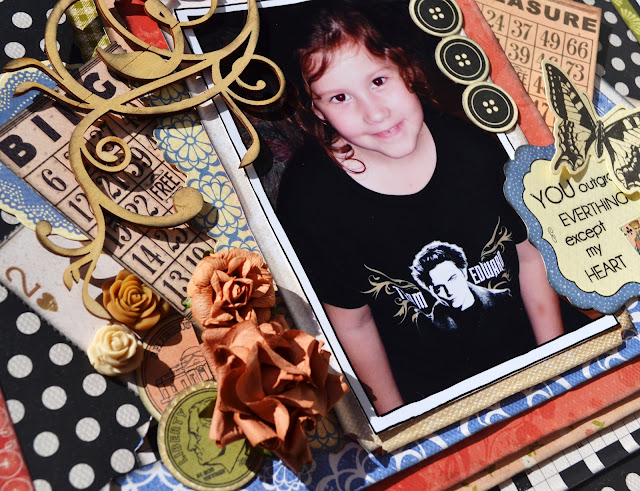 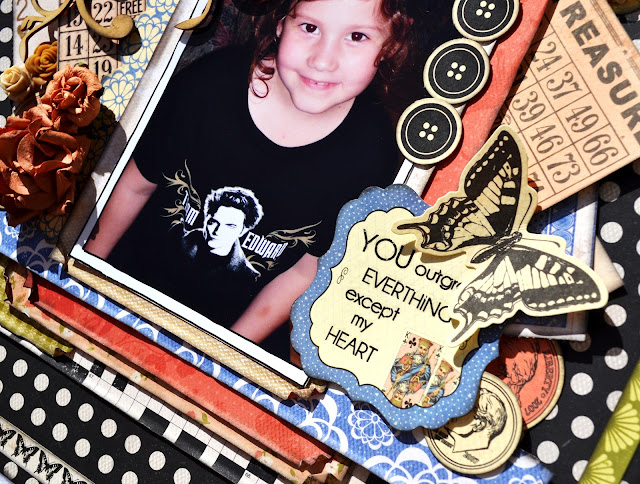 Love that photo of my girl in her 'Team Edward' t-shirt. She has a bit of red eye in that photo too, which I didn't edit out (because of the vampire thing, lol :)) Em loves her vampires, and werewolves too!

Have a great week! Check Out My Tutorials!